With a nod to  Martin Niemoller (see our previous post), when they came for the Duke La Crosse team Senator Franken said nothing. Then they came for Roy Moore,  Franken cheered. Then they came for Franken and no one was there to speak in his defense. This is the same Senator that tweeted  “@BetsyDeVosED‘s decision to reverse guidelines on campus sexual assault threatens students’ civil rights. We must protect our students.”  Yes, those were the same rules severely limiting the rights of the accused on campuses.  Poetic justice? He certainly won’t be the last they come for.

While on the subject of sexual harassment or worse and those accused of these transgressions, so much of what is discussed never made it to any court.  There has never been or  ever will be any legal determination on the claims of Leigh Corfman, Beverly Nelson, Juanita Broderick or Kathleen Willey.  These cases and so many others just come down to the very subjective “who do you believe?.”  Not so in the case Paula Jones pressed against Bill Clinton  The very existence and ensuing testimony of Monica Lewinsky and Pres. Clinton in this case allowed Linda Trip to convince Lewinsky to preserve evidence proving the then President was a liar under oath. This led him to concede throwing in the towel by paying the maximum amount Jones asked.  Further his lies under oath in this case caused him to lose his law license. No question here on who to believe.  The case entailed the claim the then Governor of Arkansas exposed himself to  state employee Jones while soliciting sexual favors.  Sounds similar to so many of today’s accusations.  What seems to be forgotten, the case was initially thrown out of court to the cheers of all the major woman’s organizations and of course Democrats. It was tossed not on the facts of the case, but for lack of standing. The court just couldn’t see how Ms.Jones was damaged.  In a civil case you have to show harm and the court couldn’t see any.    A lowly state employee subjected to extreme sexual harassment by her ultimate boss but only pain in the pocket-book was recognized. How would this play today? Jones persevered without any help from the “feminists” of the day and their allies through the appeals process to an ultimate victory that netted her little monetarily but much ugly commentary.  To this day her detractors have never embraced her.  If they couldn’t support a lowly public employee, who?  Just Hollywood stars and other elites? Have you ever heard anyone call Paula Jones a heroine? Yet she stood up and fought it out at the time in the courts unlike so so many of today’s “heroes.”

We talk about the mandatory the savings embodied in “Dave’s Plan” and eyes glaze over.  “That will never fly” they say. Yet we just ran across this little snippet in the Week, Dec. 8, 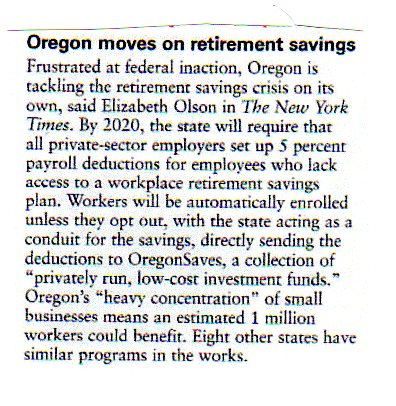 This trend towards mandatory savings accounts is gaining strength here and abroad simply because it’s a necessity to achieve the future we all desire.  Marry this to the major trend towards Health Savings Accounts (HSA) and we’re on our way to Dave’s Plan’s Personal Benefit Account (PBA). (See the entire series under Dave’s Plan) Add a credit card feature and you’re basically there. We just got there sooner.  After all, in a Capitalist Society it really good to have capital. As a wise man we knew once said, “rich or poor, it’s good to have money.”

Some of the program Republicans pined for ages has been accomplished.  A number of regulations have been rolled back and their growth has slowed. Tax relief for business is a reality.  For a country that had the highest corporate tax rate and fallen out of the top thirty countries for doing business, this has given a much-needed boost to our nation’s competitiveness.  A great number of conservative judges have been appointed.  However, one has to wonder if this just might be the high point and now for the ride downhill. President Trump and the Republican Congress could generally agree on these things, but not so much on the other problems that stubbornly remain. The tax cut looks like it will add to the deficit. (4% average annual growth for the next ten years may produce a bonanza of tax revenue but would you bet the nation on it?)  This brings entitlement reform to the fore.  Lots of luck there with a the president on record as a against any reductions.  The bi-partisan Simpson-Bowles plan could be a starting point but does anyone expect Trump to go where Obama wouldn’t (even though he appointed the commission). A bad Health Care plan died once, can they come up with something that would actually work?  Trade policy under Trump could possibly start trade wars offsetting gains on taxes and regulations. Immigration reform has a constituency on both sides of the aisle but Trump and his followers will never go for the increase we despairingly need.  With a record high stock market and a record low unemployment, the President and Republicans have horrible poll numbers.  What if the market and/or the economy take a dip? What would that portend for the 2018 and 2020? Like Obama, much of what has been accomplished can be reversed by a change in the political winds. Eau de Trump still threatens the Republican’s very existence.  Under these circumstances would you  put more money in the stock market now?  We aren’t.  Would you consider taking money out?  We are? Could this kind of thinking by itself u cause the dip?  Yes!  Are you now sleeping better?  We aren’t.

We’ll save our comments on the Middle east and wedding cakes for later and wish everyone Happy Holidays.