With Obamacare in it’s death throes, we’ll probably have to choose between three ways forward. We’ll try to help by comparing Sander’s Medicare for All, Graham-Cassidy and and our own Dave’s plan in 4 crucial areas:

END_OF_DOCUMENT_TOKEN_TO_BE_REPLACED

Setting up a new camera brought to mind thirds as in the “Rule of Thirds.” Composing a shot, one might think the subject  should be centered, but this is wrong. The idea of the “Rule of Thirds” according to Google “ means that the subject isn’t centered in the image, which is how many new photographers frame their shots. Instead, the main focal point is a bit off to one side. … Using the rule of thirds draws the viewer’s eye into the composition, instead of just glancing at the center.” Painters also have long used this rule.  Take a look at Winslow Homer’s 1889 painting “Deer in the Adirondacks” 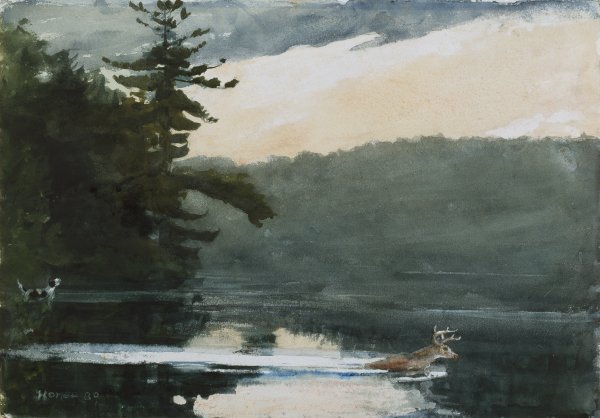 No question the deer is the focal point but the other elements make the painting interesting but secondary.. How many moments passed before you noticed the dog?

The thought came to us that maybe Donald Trump is a master of thirds. When he’s seen against the background of opponents  he stands out in relation to them. When he is viewed centered in isolation he can seem diminished with all his flaws evident. By sparring with the press, political antagonists or anyone else in his way, he can stand out against the  background they provide. In the “Access Hollywood Incident’ he was alone front and center and made smaller. On the other hand, sharing the scene with his opponents on a debate stage allowed him with  his celebrity to make himself strand out from the duller crowd. He knows how to position himself to be the focus while making the whole thing interesting, hence, the constant personal conflicts. He needs them to complete the scene.

END_OF_DOCUMENT_TOKEN_TO_BE_REPLACED

The recent problems in Charlottesville and Berkeley got us thinking  about how we can have protests and counter protests with each having their say without the shadow of violence being cast over all.  Remember, we have a constitutional right to freedom of assembly. Maybe some simple commonsense rules could allow both sides to actually get their message out without interruption. Let’s say Group A applies for a Rally Permit for a public location such as a park. Opposition Group B upon finding out about A’s permitted rally also apply for a rally  permit. (If one group needs a permit then both do as equal treatment is a must.) How should the Governing entity proceed?