We all can see what has happened in the Middle East, Isis gains, Iraqi Soldiers run away and the battle between the Sunni and Shia camps  rages across the area.  United States Policy has moved to an even more confused state, if that’s possible.  We ship arms to the Shia led Iraqi army that promptly leaves them on the battlefield for Isis as they run away.  So we are in a slightly roundabout way arming Isis.  We are negotiating the timetable for Iran to go nuclear but giving some support to Saudi Arabia in Yemen.  We attack Isis in both in Syria and Iraq while arranging training for rebels to fight Iran’s ally Assad.  There may be a brilliant strategy behind all this but unless we are missing great genius, the U.S. has the confused and lost the trust of everybody involved.

More important, no arms have been sent directly to the Kurds.  No expansion of our Air capacity in the Kurdish areas. No training of Kurdish forward Air Controllers to work with our air assets.  Unlike most of the Middle East, the Kurds actually like us.  They’ve fought Isis to a standstill and provided shelter for threatened minorities. While some would like to ignore them, we have some basic obligations in the area.  Let’s look at them again:

1. Preventing genocide.  Standing aside for so long in Rwanda is still a stain on America.  Just Ask former president Clinton.   Could we really stand aside and do nothing as say thousands upon thousands of Christians are slaughtered?  Setting up a safe zone adjacent to the Kurdish Area would show our resolve to actually do something to save masses of humanity.

2. Supporting our like-minded friends in the area, basically Israel and the Kurds.  Having a major (if unacknowledged) base right in the Area would greatly assure our friends and inspire others to remain or become friendly.

3. Influencing all nations in the area.  With Kurds not only living in Iraq but also in considerable numbers in Turkey, Syria and Iran, we would be in a position of influence without having to say a word.  The specter of Greater Kurdistan might serve to fix their minds.  Isis would have to consider our greater ability to retaliate to any provocation.  With a well-trained and equipped Kurdish army backed by U.S. air power sitting on their shoulder they just might move on to easier pickings and leave the Kurds, the protected areas and us alone.

4. Protecting trade routes.  With an unsinkable Aircraft carrier in the area, our ability to keep the oil and other things moving would be greatly enhanced.

5. Preventing nuclear proliferation in the area.  Nothing would be worse than a bunch of unstable nuclear nations in a sea of fanatics.  The key here is preventing Iran from going nuclear.  We have proposed the idea of an attack on Iran’s nuclear facilities being a real option.  If we actively consider this, it might bring an attitude change among the Mullahs.  As we said above, greatly expanding our presence in Kurdistan would fix their minds and add to the pressure o  Iran. 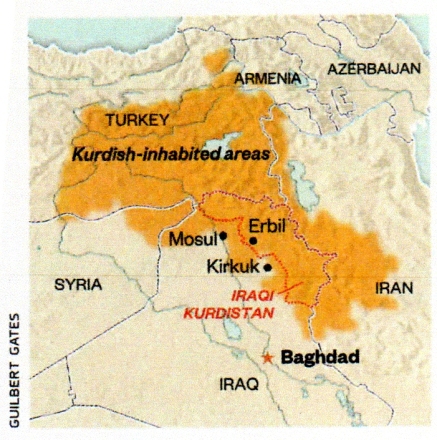 In a sense Kurdistan is the high ground in this battle and cries out for us to move there.  Just look at the map above.  Beyond the current turmoil there’s an even greater opportunity.  We can take steps indirectly to change of the Muslim World.  This was one of the reasons for George W. Bush’s war to oust Saddam Hussein.  A free and democratic Iraq would be a beacon to the Islamic World to modernize and reform.  Iraq was considered fertile ground because of a better educated more secular populous.  This turned out to be for the most part a fantasy.  Religious and tribal affiliation still dominated as the current Shia vs. Sunni hostilities testify.  However, this might still be possible in the more homogenous Kurdistan.  Much of what we thought was in all of Iraq actually exists there.  The Kurds are openly seeking western investment and appear open to the modern world that comes with it.  As a much put upon people, they look for recognition and prestige.

What better to achieve this than a great seat of higher learning?  Yes a university but no we can’t be the ones to build it.  Egyptian Pres. Abdel Fattah el-Sisi spoke of  Islamic reform at Al Azhar University in Cairo but real reformers may not feel safe to speak out there.  Even though many scholars feel the Muslim World reached its height under when Mu’tazilites thought held sway anyone echoing thoughts similar to theirs today could easily end up dead even in Cairo.  The only place in the Islamic World where a wide open religious discussion might be able to take place just might be Kurdistan.  This reformation must take place or we will be fighting large numbers of Muslims who are at odds with the rest of the world far into the future.  We can’t build such an oasis of thought but we can encourage a modern University that allows openness in all areas.  Science, liberal arts, business, religion and anything else that would appeal to young Muslims.  Remember the Muslim World is young and the young are more often open to new ideas and change.  Without change the world faces a terrifying future.

But won’t this unspoken alliance with Kurds lead to the demise of Iraq?  We think everyone has to realize that ship has sailed.    The middle east is a cauldron of changing alliances, boundaries and antagonisms.  The Shia in Iraq may tire of subservience to Iran and seek a rapprochement with the Kurds.  Same with the Sunnis.  They might really come to hate Isis and other ultra Orthodox movements.  A strong position with the Kurds would give us the best chance to influence events in the area in a positive way.

What of our traditional allies in the area, Jordan, Saudi Arabia, Egypt and the Gulf States?  They would know we haven’t left the area but we aren’t going to fight their sectarian wars for them either.  Any help we give them needs to be conditioned on what they are willing to about Arab refugees.  We should never forget how refugees have destabilized the Middle East for decades.  Now there are more than ever. Having our own oil and gas and a strong position in the Area means we would get a hearing from  everyone.

2 thoughts on “You didn’t listen, now what?”